Mr Cumberbatch and I have many things in common. We like a drink at four o’clock. We support our local newspapers and admire good journalism (although I probably wouldn’t choose either of the examples pictured here as my top choice). And we support the arts. He’s got better legs than me, I’ll give him that, but I suspect his pins see more of the Caribbean sun than my own do. 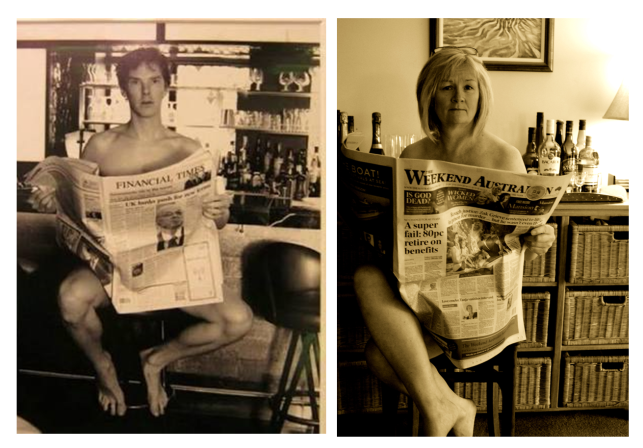 Entering into the world of crowdfunding has given me a whole new perspective on how works of literature, art, film and more are brought to fruition, the incredible variety of projects that creative people are presenting through platforms such as Unbound and Pozible, and the inventiveness with which they push them into the light of day.

It’s also given a good sharp twang to the nerve endings of my own under-utilised philanthropic bone. We make occasional donations to charities in our household, but we have no regular habit and we don’t generally give to the arts. I’m beginning to wonder why when it’s now so easy and so commonplace, and anyone can do it.

I talk to my children about what’s going on in other parts of the world, particularly when we see refugees and homeless children on our screens. So we have agreed, my husband and I, that once a month we will donate or support. We will involve the children, and each of us will take turns at nominating a beneficiary. My Other Half has suggested the Fred Hollows Foundation. My son is still thinking about it, but he is only ten.

Since it’s my idea, I’m taking first dibs, and have become an arts sponsor, by pledging for a book by my fellow Unbound author Jamie Ramsay, whose Running the Americas is about his journey from Vancouver to Buenos Aires through fourteen different countries. While my own adventures may be more domestic, that same spirit and quest for adventure in other parts of the world has definitely informed my own journey, writing and life. Plus he’s 4% funded and needs encouragement. Go Jamie!

Honourable mentions to Tamsen Courtenay’s Four Feet Under in which thirty homeless people share their lives – anything which serves to humanise homeless people or refugees is deserving of support, in my view. And also Beth McColl’s How to Come Alive Again – because it looks like a good book for any woman to have on their shelf, especially a woman with a daughter who might someday need words of wisdom. But both those are fully funded already – and I figured Jamie needed my spondulicks more urgently.

What has Benedict Cumberbatch got to do with all this? Well I believe there’s always room for a picture of Mr C. And with images of women having been used for decorative purposes in art, advertising and commerce for centuries, I’m guessing that as a broad minded style of bloke, he might be fairly open to evening up the balance. This picture would certainly suggest that.

More importantly, he’s a vocal and articulate supporter of the arts and not just his own, and I love that about him. So I joined him for drinks with the newspapers on Saturday afternoon.

I was going to support my local newspaper for Northern Tasmania which does such a good job, The Examiner, but it’s tabloid format and I needed more coverage – literally.

Have you considered supporting an artist or writer today? It’s easy. Buy a newspaper, or a book. Or if you’ve enjoyed this and would like to read more, pledge your support by pre-ordering your copy of my own book – right here!

One thought on “Learning how to do crowdfunding”