Last year when my book was in the final stages of edit, three men in my writers’ group told me they would not buy it because it had the word ‘wife’ in the title.

To put their remarks in context, we were having a discussion about the title, and whether I should change it. An old school friend had told me he thought the ‘gender stance’ was ‘open to question’ in 2018. It was an authorial position that the market and my readership should not demand, he said. 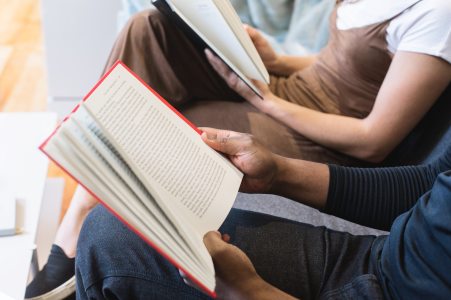 After much thought, and a certain amount of stewing, I’m not convinced. Women are great readers of books about other women. And men bloody well should be too. (Some are, of course, but I’m still stewing.)

Apple Island Wife was nine years in the making – many drafts, the bottom drawer, a year of crowdfunding, edit and design with a digital-age publisher Unbound.

It’s a travel memoir, about our first five years in Tasmania after moving there on a hunch. Think Driving Over Lemons, think River Cottage (better hair and glasses.) The trick with this genre, as Bill Bryson, Peter Mayle, Sarah Turnbull and Chris Stewart know, is that it’s full of humanity and tales that any reader can relate to easily. Ostensibly, it’s about the author. But at its heart the best memoir is self-deprecating, observant and reflective. It’s about life as we know it, Jim.

My book is light and deliberately commercial. I wanted a readership. It also goes a little deeper, on things in women’s lives that often go unspoken, and which can make us feel isolated. So yes, there are funny stories about learning to interpret what your alpaca shearers are saying (‘Ave you got them drenches ready?’). About having a bra fitted in a country department store. And there are reflections on how women struggle to hang on to their sanity sometimes, in a world where they’re expected to work, raise the family, keep the house, support the husband’s business and be everything to everybody. Common themes in many people’s lives.

I’d be naïve not to realise that these were issues that women think about more than men. But if you’re a father, a husband, or a teacher of people, then I suggest that all of these issues, including the important one of how women and men rub along together, concern you at some level.

To hear those three men in my writers’ group invoke a blanket-rule counting my book out on the basis that it had ‘wife’ in the title, seemed like incredibly reductive thinking. Frankly I was agog. And a little insulted.

Thankfully there was another man at the table, who had been with the group longer and seen my long journey to publication. He spoke up. In his view, the term ‘wife’ had more levels of meaning in a rural environment. To him it meant a woman running a farming operation, and keeping a household, a business, a family and a community together. I know this to be true. The rural women I know, most of them wives, some of them widows, liaise with suppliers, feed teams of harvesters, manage relationships with banks, drive tractors and muster cattle. They’re awesome.

The urban wives I’ve known, it has to be said, are just as formidable . They manage their homes – something people used to have staff for, let’s remember – they partner in businesses, hold down jobs, liaise with schools, raise the leaders of tomorrow, pack lunchboxes, organise events and calendars, and basically run a small-scale logistical and catering operation for their family. In the corporate world, this role is known as Chief Operating Officer and it’s highly paid and valued.

Clearly the word ‘wife’ does not conjure any of these things for those three men. For them it conjures notions of light reading chick-lit which is not serious or weighty enough for them.

This discussion made me prick up my ears generally about how women and men choose books. A couple of weeks later, on a podcast of the BBC Radio program Open Book, I heard a bookseller say that male customers in his shop who ask for a book recommendation frequently say they don’t read books by women.

For the majority of my reading life, in my twenties, thirties and forties, I’m not aware that I’ve ever excluded choices in this hard-and-fast gender-related way. I have never discriminated against a book because it’s written by a man, or because it appears to be about men, or women. I’ve read The Hypnotist’s Husband, Too many Men, About A Boy, The Kitchen God’s Wife, Girl on a Train, Gone Girl and Girl With A Pearl Earring with nary a thought for who’s wearing the trousers in them or whether that matters.

However, the longer I thought about it, the more I had to give some ground. Because my reading habits have changed, and I do thing about gender.

When I was in my twenties and doing what I now consider my ‘serious reading’, I read the greats. Amis, Chatwin, McEwan, Carey (unsuccessfully), Irving and Styron. Those are all blokes. But I also read Atwood , Paretsky, Winterson, Byatt and Tan. They all stood me in good stead and I absorbed their fascinations, their genius, their wit, erudition and skill, and used it as best I was able to hone my own writing.

But now, things are different. I’m in my fifties, and life is busy. I have two teenage children and ten years of working life left in which I must wring myself dry in order to get those children through college and feather my nest for retirement. I’m spread thin. And at the end of the day, I no longer want the great greats, I want the other greats — the ones writing slightly intellectual escapism. And that’s all the clever ladies — Niffenegger, Atkinson, O’Farrell.

These women are my go-tos because I know I can rely on them to give me what I want — high quality, brilliantly written fiction.

What I don’t do, because it’s wrong, is have a blanket rule, and turn down all male authors. When the latest Winton is on all the stands in the bookshops, I’m definitely going there. I gave Lee Child a shot lately because I was sick in bed and he was easy, and because he’s everywhere on the radio. The Jack Reacher series was okay. I stopped at four, because they’re hyper-violent. And nowhere near as witty or culturally sharp as Kate Atkinson.

Perhaps women writers give women readers what they want, and perhaps it’s a world in which women are front and central. Why would I read a John Le Carre in which the women are stereotypes and bit-part players, whores, housekeepers and secretaries, when I can read Stella Rimington, former boss of MI5 and now successful novelist, writing novels about Liz Carlyle who’s a crack spook and also interested in shoes?

And this is where I find I’ve painted myself into a corner. I’m making book choices that are relevant to me. So I have to begrudgingly accept that those three men in my writers group are doing the same. They won’t read my book because they have instinctively figured out that it’s written with women in mind (which it is), and they probably won’t enjoy the jokes about breastfeeding. (They won’t.)

I still find myself wondering at a blanket refusal to expose themselves to the world that women writers conjure, and women occupy.

I fear chick lit has a lot to answer for here. All those subliminal messages that publishers have developed to signal ‘book for ladies’ have spread like a contagion, apparently set some men’s minds against us and our ‘softer’ experience of the world, and perhaps even cross-infected other genres and books by women as a whole.

I guess this can only be true if you consider ‘chick lit’ to be a contagion. I’m not completely sure where the boundaries of chick lit lie but suspect I’ve read some and enjoyed it. I thought some was a bit lightweight, but then I also think Roth is too miserable to be born, Rushdie is unreadable guff, and Peter Carey is only any good when his ex-wife edits him. Just because you’re in the ‘serious literary’ annals doesn’t make your book more worthy. It doesn’t even make it good, in my view. There are plenty of men and women writing and reading both literary and commercial fiction, and whether it’s good or not has nothing to do with the author’s gender.

If you can accept that chick lit is not somethign to be ashamed of writing or reading, then you can see that it discusses heavy duty subject matter in an approachable way. Liane Moriarty’s Big Little Lies is about domestic violence. In The Break, Marian Keyes makes a persuasive case for the legalisation of abortion in Ireland.

At a later meeting of my writers’ group, one of those three men offered a copy of The Girl On The Train as a giveaway. Had he read it, we asked? No, no, no. He shook his head as if swatting away an irritating fly. Or a preposterous idea. “My wife has. But no, I won’t,” he muttered. I was trying to get comfortable with my new and still tenuously held belief that it’s okay for men and women to choose books that play to gender. I couldn’t help wondering what he was saying about his wife?

Later in the meeting he expounded the view that ‘You’ve got to read Kafka at least once in your life.’ At that point I found myself getting a bit twitchy about intellectual posturing and pompous twaddle.

If a man excuses himself so comprehensively from exposure to a book written by or apparently for women, if he’s thinking it won’t be up to his expectations, he has a perfect right to do so. But I still think he’s making an unacceptable statement by invoking a blanket rule. And he shouldn’t make that statement out loud.

If Alexander McCall Smith changed The №1 Ladies Detective Agency to something less ladylike, would he reach a wider audience?

Should Chaucer have forgone The Wife of Bath and gone for The Person of Non-Disclosed Gender of Bath, so as to appeal more to your average bloke in the Middle Ages?

If Audrey Niffenegger had written Henry the Time Traveller as gay with a long-suffering partner called Claude, would my gentleman friends at writers’ group have at least heard of her? (They’re no longer my friends, by the way, I’ve resigned.)

The conclusion I’ve reached after my stewing is that it’s okay to think about gender when choosing books, the author’s gender and that of the characters. But it’s not okay to make a blanket rule about what gender author you will read. Exceptions should occasionally be made. And I might be wrong, but I thought what was expressed at that writers’ group meeting was low level misogyny passing itself off as intellectualism.

According to the reviews, my book is read mostly by women, but also by some men, presumably quite broad-minded ones. And by one treasured reader called Di, who said on Goodreads: “I encourage everyone to read this book, and especially men. It’s for everyone, and I really think it gives insight into life and, gentlemen, maybe into the women in your lives.”

Couldn’t have put it better myself.

Fiona Stocker is the author of Apple Island Wife — Slow Living in Tasmania. She is also a wife, mother, freelance writer and occasionally a pig farmer.

16 thoughts on “Do women and men choose books differently?”