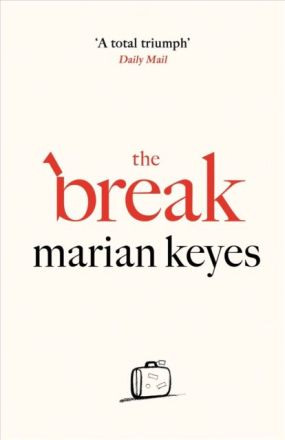 I’ve read a lot of literary fiction and commercial fiction in my reading life, and there’s a constant narrative in my head about the relative merits of the two, and whether there should even be a distinction.

I’ve just read Marian Keyes’ latest novel The Break and wrote a review of it for Goodreads, and it got me thinking about the debate again.

She’s great craic, Marian Keyes. I’ve read a few of hers before and thought, there’s a writer who doesn’t put a word wrong. Besides being great craic, she’s clever, for a so-called ‘commercial women’s fiction’ writer. That’s what she’d be classed as. I think she’s cleverer, and a better writer, than that moniker suggests.

Colm Toibin, who I’ve moved on to next, would be classed as altogether more serious. Literary fiction rather than commercial fiction. Altogether more weighty. Something you have to have your spectacles of intellect on, for the reading of.

And it shouldn’t be so.

When I scored a copy of The Break for a dollar at my corner shop in a fairly remote part of Tasmania, I was pleased. Marian Keyes manages to be all the things a reading woman such as me wants of a book in my busy mid-life. She’s entertaining and engrossing. I look forward to catching up with the characters and the story at the end of every day. She’s irreverent, in a real and authentic way that makes you feel it’s okay not to be entirely serious and listening to the news all the time, at a time when the news is always pretty shit. And finally, she’s always just quietly addressing something relatable, like staying married through your mid-life. And then at some point in every book, she address something important, like substance addiction and the havoc it wreaks on families, or like a lack of government sanctioned, public service, legal abortion services.

SPOILER ALERT. Three quarters of the way through this book one of the female characters has an unwanted pregnancy and the family has to deal with the crisis, in Ireland, where abortion is still illegal. Keyes writes about it in a very real and pragmatic way which conveys both the emotional distress and logistical difficulties. The fear of going to prison if you’re found to have ordered an abortion tablet online. The banal challenge of finding somewhere to stay in London when you go over to have the procedure there, getting back to Ireland on the plane when the patient is in pain, and finding someone who’s available to pick the person up from the clinic when the mature adults in the story are either at work at commitments that can’t be rearranged, or are men who aren’t really well enough known to the patient.

Women all over the world can relate to this, including those of us in Australia. There are no public service abortion clinics in Tasmania currently. Our state government struggles to sort this out, partly because it’s difficult to find places to locate such clinics for the safety and privacy of those using them, and partly because our government is run by Rather Conservative Men, some of whom appear to have religious views which would make this part of their job difficult for them.

The rest of this book is a story about a mid-life couple who have a bit of a crisis. It’s very relatable-to. It made me feel better and more determined about my own marriage. It was a bit long winded towards the end, and the central character Amy resists getting back together again with Hugh a bit longer than she should have done. But it was a highly diverting read for at least a week.

The Colm Toibin book I’ve moved on to (another Irish writer, but male and perceived to be all manner of highbrow and poetic) is about similar things, it’s about a mother of four who’s lost her husband and has to cope. Similar mid-life crisis written from the woman’s point of view, then. But this is by a Serious Man Writer. I started it last night and I’m one chapter in so far.

The conventions of literary fiction are apparent already, in that there’s a faithful retelling of banal, everyday conversation, and there’s a strong internal dialogue for Nora, the central character, who is facing a life changing situation. In this way, it’s no different from The Break, by Marian Keyes.

Where it’s different is that Nora Webster, by Colm Toibin, makes you work a little harder to read it. Maybe I’ll offend here, but there’s a banality about it, deliberately so.

And in my mid-life mind, a mind which has read many, many book like this in the past and unfortunately cannot now be bothered with them, that makes it a boring, laboured read and somewhere I’ve been too many times before.

Literary fiction, I believe, doesn’t have to be laboured and banal. Look at Tim Winton – he’s anything but.

There’s faithful retelling of banal conversation in Marian Keyes’ writing as well. The difference is that Keyes writes it to be deliberately entertaining and more heightened, dramatic and funnier than everyday life. More irreverent. It’s harder to do than you would think, this, so she deserves all the kudos she gets.

Colm Toibin is evidently for people who like their everyday life a little more under-stated than me. People who aren’t looking for escapism with an occasionally reflective bent. I’ll give him a bit more of a crack, but he’s going to have to pull his socks up.

I’ve recently written my own, deliberately commercial book and it’s on the point of being published now. I applied for funding from Arts Tasmania when I was writing it, and was told they looked for ‘literary merit’, the inference being that mine didn’t have that. And no it didn’t, not at that stage of first draft. More reflection and a more literary style came later, during the edit stage, which isn’t unusual, but Arts Tasmania don’t apparently know that. Pity.

Although I’m not a ‘literary’ writer as such, there are now moments of literary flair in my book. But I set out from the start to write something that was heart-warming and relatable, while also reflecting upon the challenges we all face. Inspired by writers like Marian Keyes, because I think the literary world is sniffy about such writers where it shouldn’t be.

I’ve seen some of the aspiring ‘literary fiction’ that gets funding from Arts Tasmania and  I suspect it’s a case of it making the right noises. It tends to have as its subject matter the Tasmanian landscape, Tasmanian indigenous heritage, Tasmania’s environmental value. The example I’ve seen, of work that got funding, was not good writing. It had a clumsy and dull use of language, the prose didn’t flow or sing from the page but was lumpen and boring. Unedited. My fingers were twitching to work it up.

Two reasons I don’t want to write like that are 1) it’s not very good writing, and 2) I wanted to write something that might just sell. I need to help support my family. My somewhat middle class goal is to buy a caravan. I’d like to go on more holidays with my husband and children, while some of them are still interested. Sorry, Arts Tasmania, if those are the wrong aspirations.

I actually doubt that Colm Toibin is going on many five star holidays but perhaps I’m wrong there. If not, that’s another reason to eschew a five star literary fiction career.

Thanks Marian Keyes, for the craic, the reflection, the entertainment. And carry on as you are! My dollar was well spent and I’d have paid a bit more too – just as plenty of other readers do.

This post is based on a review by Fiona Stocker on Goodreads. You can find her travel memoir Apple Island Wife as an Ebook on Amazon, and a paperback at the Book Depository, or your local bookshop.

One thought on “Marian Keyes versus Colm Toibin”