Tuesday was quite a big day for me. I signed a contract with Unbound, a crowdfunding and publishing phenomenon who have changed the face of publishing in the UK. As long as I meet my crowdfunding target they will publish Apple Island Wife – one woman’s adventures on five acres in Tasmania, in digital and paperback form in the UK and Australia.

Tuesday was also a big day for my husband. He wasn’t feeling so well. As he gets older he gets creakier and it seems as if every month there’s a new and strange lurgy afflicting some part of his anatomy which I am called upon to peer at in order to try and determine a cure. What’s mine is his, and what’s his he’s certainly keen to foist upon me, so there isn’t a square inch I’m not horribly familiar with now. So the book deal with the publisher kind of got swallowed up in the ordinary detritus of a life which involves keeping a couple of small businesses going, feeding the family, and making it to the doctor’s for a good poking and prodding.

On the way into town that evening for a networking event, I suddenly felt inspired to share the good news with Smudge my ten year old son. It seemed fair that I should get to share it with somebody, after all, and he was a captive audience in the passenger seat next to me, inscrutably downloading his choice of tracks onto my Spotify account and following skateboarding dudes on my Instagram. Is nothing sacred?

As we cruised southwards between the vineyards, I turned and gave him the benefit of my good news. ‘I signed a contract today with a major international crowdfunding publisher,’ I said.

‘Uh huh,’ he replied, without skipping a beat, just as if I’d said ‘I vacuumed underneath your bed today and bought you some new underpants from the supermarket.’ I really believe he would have been more excited about the underpants.

Anyway, let me share it with you here, dear reader. I have indeed been accepted by Unbound in the UK. They combine crowdfunding with publishing, were set up by three writers around six years ago and now employ forty staff in central London (amazing the reassurance a few minutes on Google Earth can bring). They appear to be changing the face of publishing, having a list of around 250 published titles, supported by 121,010 pledge givers from all corners of the globe. They caused a stir a couple of years ago when one of their titles go onto the Man Booker longlist, that bastion of traditional mainstream publishing.

That won’t be me, my book is a light, feelgood, entertaining and humorous taste of the good life here in Tasmania. It’s not intended to win prizes or even achieve literary greatness, it’s just a good read and a funny one, and a peek through a window into a glorious part of the world at a time when many people could do with a little respite and relief.

But I’m honoured, thrilled, privileged and excited to have made it through the first round of selection and to be launching a crowdfunding campaign with Unbound within a few very short days!

When I wasn’t consulting with my husband on his ailments or driving my children to after-school events, I spent the last week writing campaign material and making a campaign video. 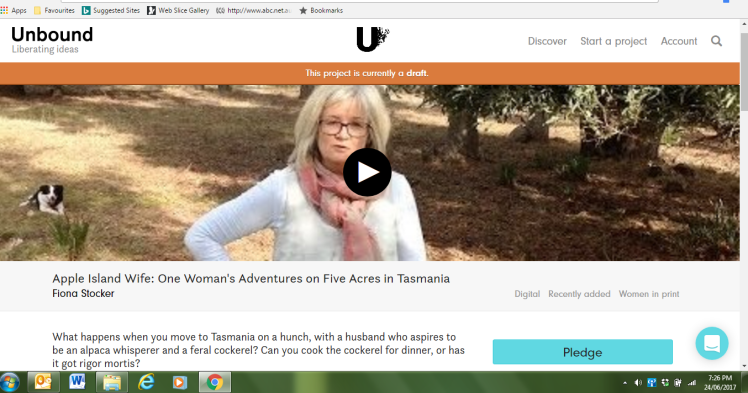 It will be hosted on the Unbound platform but driven by me for 90 days. Expect a beseeching email shortly! Or just keep an eye on their site, hop over and pledge! Rewards include copies of the book, naturally, and a few other treats still to be finalised – a couple of nights staying with the Wife on the farm, or having your short story manuscript-assessed.

I’m way more excited about this than I am about vacuuming and purchasing new underpants, and I’ll be sharing updates every inch of the way here and on my Updates page on the Unbound website.

The time is now! Come seize the day with the Wife!

POSTSCRIPT! My campaign on the Unbound website is now live – you can visit and pledge your support here. Don’t miss out on the video, in which the whole world gets to see me in my bathers.

TASSIE SPECIAL! Because the cost of postage to Australia is proving prohibitive for many of you lovely people, I have come up with a plan, whereby I order bundles on your behalf and deliver when they arrive. Pre-payment is still required, except you pay me direct (receipts given!). This is a ‘friends only or someone I’ve met who is local to me and we trust each other’ deal only. Please get in touch if this appeals.

4 thoughts on “Apple Island Wife to publish with Unbound”

Apple Island Wife – Slow Living in Tasmania. A delightful tale of leaving city life and moving to five acres in the country, told with trademark wry humour. Available in paperback and e-book from online bookstores, and through selected bookshops.

“Fiona Stocker is funny. Very funny. She also has an eye for the telling little details. I just loved this book.”  Pip Courtney, ABC Landline