Not many in rural Tasmania dine in 3-star Michelin style very often, but we had the chance to do so last week, when legendary chef Alain Passard visited our island and created three spectacular dining events, at Josef Chromy Winery, Peacock and Jones Hobart, and Drysdale, the restaurant of TasTAFE in Launceston.

In these celebrity driven days, chefs can be famous for being on television. Passard is from an earlier generation, of chefs who were famous for being chefs, for innovating before the idea of innovation was invented, for doing astonishing things and inspiring those around them with deep and genuine artistry. Named the best chef in the world by his peers, and fourteenth on the list of World’s Best Chefs, he was given a lifetime achievement award last year at their New York’s awards.

‘I’ve tried to share Passard around a bit while he’s here,’ says Christopher McGimpsey, architect of the Great Chefs Series and the man who has persuaded chefs of such interstellar stature to visit Tasmania.

First to feel the love were diners at Josef Chromy Winery just south of Launceston. Your writer didn’t attend this one, but I’d tasted the celeriac and mustard ice cream in the TAFE kitchens the day before, where it gave my tastebuds a good slapping and blew my socks off.

The following evening the Passard roadshow moved on, to Hobart’s Peacock and Jones, the tiny and exquisite restaurant hiding within the Henry Jones Art Hotel terrace.

The restaurant is akin to a chef’s table, with a gallery kitchen occupying one long convict built wall, and dainty tables for just twenty diners the other. Diners gathered in the open atrium out back for hors d’oeuvres with Sud Polaire gin and tonic around the open fire, and established that we were all photographing the plates with our iPhones and shouldn’t feel shy about it.

The lovely staff of Peacock and Jones ferried canapes around while Monsieur Passard appeared and, despite a want of English, busily visited every group, shook hands and charmed people. Having limited French, I had prepared for the occasion by translating possible conversations with a Michelin chef using Google Translate, but Passard caught me by surprise by pointing to my bumble bee brooch and giving it a beardy Parisian pout and a thumbs up. The only thing that crossed the blank landscape of my mind at that point was to buzz like bee, but thank god something saves us from ourselves at such nerd-like moments.

Then we were swept inside and the real business of the evening began. Will the company be agreeable, one wonders on such occasions, and mine was. Pauline and Tim had flown down from Sydney for Passard’s visit and were predisposed to affability. Katie and Matt brought lashings of bonhomie to the table and our half dozen was completed by myself and Hugh, Exec Food and Beverage Manager at Saffire-Freycinet and Peacock and Jones, a man for whom top shelf bonhomie is a stock-in-trade.

Very quickly an exquisite plate was presented, a wafer thin carpaccio of stripey trumpeter in verbena oil, with shavings of radish and delicate micro salad leaves. It was a delight to see these tiny leaves, coming as they do from my neighbours in the Tamar Valley and fellow producers in this year’s Farm Gate Festival, York Town Organics. Back to the plate: delicate as it was, for me the presence of Michelin starred credentials was evident in the perfect balance of the seasoning, and the clever contrast between the delicacy of the ingredients and strength of the flavours. So this must be what Michelin starred cuisine is all about, I surmised, and settled in for a pleasant evening.

What with the kitchen being right there with an open invitation for diners to get up and have a sticky beak over the pass, I finally got to practice my, erm, French. ‘Puis-je prendre des photos?’ I asked the chef as he presided magisterially over the trumpeter. Passard’s sous chefs both wear immaculate paper chef’s hats but the man himself remains bare headed  save for lushly coiffed locks. It’s as though he’s dialled the gods and ordered the correct hair for a dashing and somewhat roguish senior industry figure, and the gods have delivered in handsome silver waves.

‘Bien sur!’ he answers and I need no further encouragement. Soon I’m snapping away just feet from his culinary eminence, practically breathing down his neck as he tries to concentrate on the ‘gesture’ and getting the seasoning right. 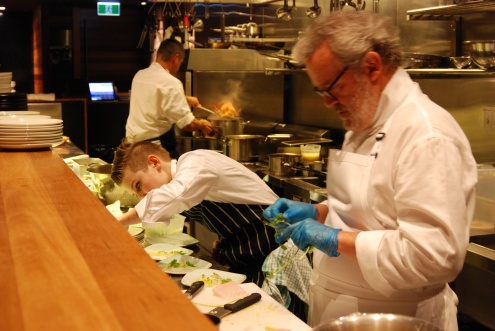 Passard plates up – it’s all in ‘the gesture’ 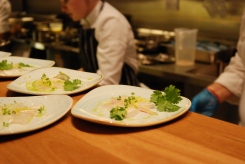 I have to sit back down again when the plates come to the table. To begin, we’ve enjoyed an egg. Not just any egg, but one with four spices and maple syrup. It could almost pass for any old boiled egg were it not for the presentation, balanced upon rice grains in a copper pot, and the mouthfeel. I can’t detect what the spices are but the texture is a revelation, a frothy emulsion that caresses the palette in ways that my husband is yet to achieve with his morning eggs.

Celeriac risotto with parmigiano reggiano is a further delight for the eye. The small pile of risotto has a satisfying bite and packs a flavour punch with all those cheeses, but the magic is dealt by the moat of creamy umami froth that encircles it, silken and cloud-light.

Would it be acceptable to say lobster is lobster, even when prepared lovingly by one of the world’s best chefs? For me the rock lobster with smoked potatoes wasn’t the dish of the evening, despite its promise. My Other Half and I purchased crayfish direct from the harbour on the Greek Island of Kefalonia once, and ate it as per the fisherman’s instructions with some crusty bread and mayonnaise, and in truth it’s difficult for me to distinguish between these two moments of crustacean adventure. Passard’s own sous chef Marine tells me that there is less potential for expression with meat or fish, that the possibilities are more abundant with vegetables. ‘Do you understand?’ she quizzes me seriously, in her gruff Brittany manner, and I do.

The lobster is accompanied by one of my preferred wines of the evening, the 2016 Domaine Simha Rao Chardonnay. I’m lucky enough to have the maker, Nav Singh, seated beside me now, as Hugh has gone a-mingling. By the time Nav is done telling me all about the closed cycle of his wine making, in which by-product from the wine is double distilled to make gin, with the botanicals balanced on a rack above the distillate so that the flavours are produced by vapour rather than steeping, I’m one hellishly thirsty woman. Shame I don’t have a glass of his spectacular sounding Sud Polaire ‘sipping gin’ in front of me, but I’ll make do with his slightly cloudy Chardonnay – deliberately so as it’s un-fined and unfiltered – my favourite drop of the night.

Finally the kind of dish we’ve all been waiting for, given Passard’s espousal of ‘le legumes’ over everything else – a ‘medley of vegetables’ with fine couscous and vegetable merguez sausages. As I sit back from the table listening to Nav, the scent from the plate rises to greet me in a steaming cloud. It seems Passard may have an alchemist’s ability to elevate the vegetable far beyond its humble earthly origins. Everything on the plate has had its fullest flavours realised, but it’s the smoked grapes which keep me poking around amongst the broccoli, searching out their bubble like form for another pop of sweet smokiness.

The evening rises to a crescendo along with the noise levels. What with all the Chardonnays, Pauline’s vowels become more Glaswegian, Katie’s hairstyle goes all rock and roll, in a good way, and Tetsuya pops in and sits quietly up one end of the room, just to observe a fellow great one behind the pass.

The chef comes out for a Q&A session in which he refuses to give away the secret spices in the tiny beetroot canape, but concedes that he believes there to be similarities between the terroir of his native Brittany, and our own magical soils and conditions. It’s just as we Tasmanians have suspected, there is greatness in the cooking, but there is Michelin star potential in what we produce here. 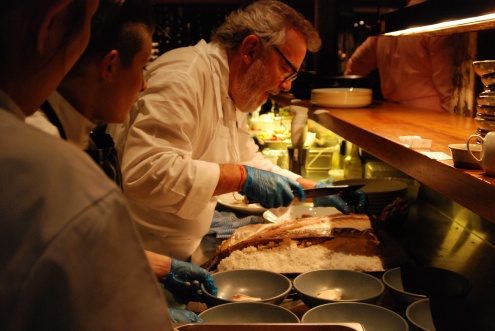 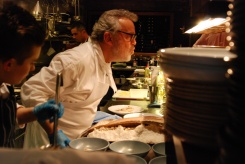 Making my way out to the front of the Henry Jones, I find Katie and Matt strolling hand in hand down the street enjoying a quiet post-prandial cigarette, heads up, taking the air and loving life. I know just how they feel. We’ve just had the privilege of seeing a master at work, dined sumptuously on his talents, and washed it all down with some of the world finest wine made by those who live in our midst. Really, Brittany or Hobart – what does it matter? One wouldn’t be anywhere else for quids.

If you can bear to read more, a review of Saturday night’s 12 course degustation dinner will be up within the next couple of days, because this man’s food, and our island’s produce, deserves proper attention.

Apple Island Wife – Slow Living in Tasmania, is Fiona Stocker’s humorous memoir of leaving city life and moving to five acres. Available in paperback and e-book from online bookstores, and through selected bookshops.

“Compulsive reading for anyone who has ever thought they are not living the life they should!”