Every so often a food comes along that you’ve never heard of and suddenly it’s everywhere. What the hell is that, you ask on first encountering it? What is miso, apart from something that Gwyneth Paltro likes? What is kimchi, apart from a sound you make when you sneeze?

What is kombucha, you’re asking one day, and a couple of weeks later you’re downing a bottle every morning to give your gut flora a treat. 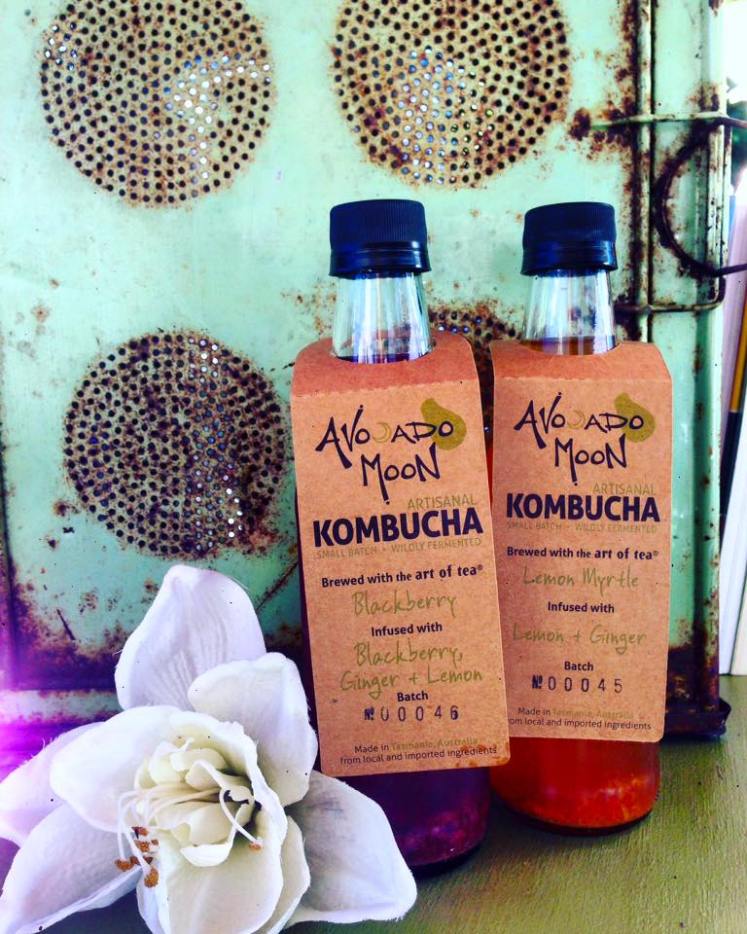 Kombucha is sweetened tea which has been brewed so most of the sugar ferments out. It has minimal impact on blood sugar but many reputed health benefits. To make a brew, you leave a quantity of tea to sit until it grows a SCOBY – a Symbiotic Culture of Bacteria and Yeast, a kombucha mother which can then be used to create brew after brew.
Scoby mothers are hard core. Owners of Launceston company Avocado Moon, Lauren Thomas and Marlow McGregor found a Scoby in a bottle under the seat of their car one day, pegged it out to dry and posted a picture of it on Instagram. For anyone not in the know, it looked for all the world like a teeny swimming cap for an elf. That Scoby could well have lived to brew another day. They’re tenacious little suckers. 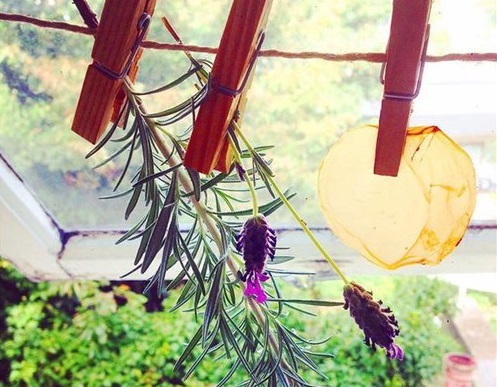 Lauren, otherwise known as LT, believes that kombucha is about to hit Australia in a big way. ‘Kombucha is coming,’ she says on her stall at Harvest Launceston. ‘I reckon in the next year you’ll see it explode on the market – the fermentation wave is about to crash on Australia.’

LT can speak with some authority on this. She’s from the United States where kombucha has conquered hearts and minds as well as the market. ‘Kombucha is a really big thing in the States,’ she says. ‘It’s in all the health food stores.’

As a fermented product it’s thought by many to improve digestion and gut flora, mental clarity, and mood stability. Its power as an elixir is certainly what drew LT to it. After travel adventures in South America left both her and partner  Marlow with the parasitic gut infection Giardia, she was given a kombucha by a friend of the family. It conquered the bloating, got her digestive system back in order – and became the first product for her food business Avocado Moon. 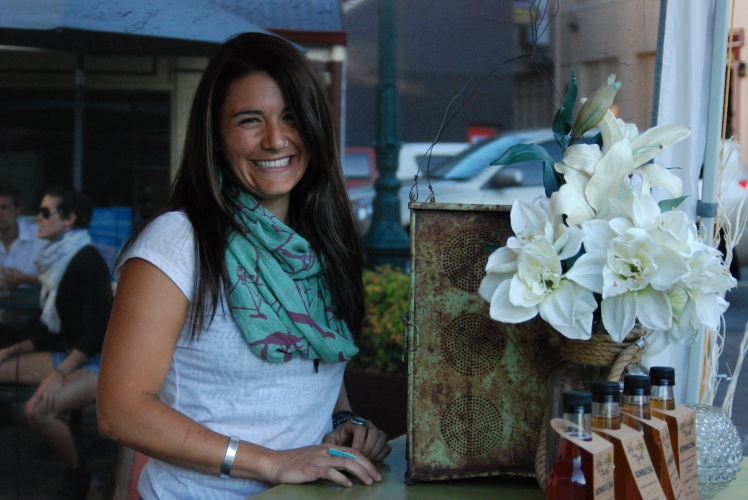 The couple moved to Launceston so that Marlow could study architecture at the University of Tasmania. ‘I was making kombucha for myself and noticing all my own health benefits, and I could see that it wasn’t available anywhere,’ says LT. Only the commercial version appeared in a few shops but in pasteurised form, which destroys the beneficial living organisms created by the fermenting process.

Pretty soon she was brewing regularly in the commercial kitchen at Launceston’s Fresh on Charles, where she works, selling there and at a couple of outlets in town, as well as on her Avocado Moon Brew stall at Harvest Launceston (check Harvest website for dates).

LT is the perfect brewer of kombucha, zipping around the market hugging friends and customers, her rich rounded Florida vowels and natural enthusiasm irresistibly wooing them to the benefits of the ‘buch’. LT is the energy and the fizz in the business. Alongside her in every sense is Marlow, the yin to her yang, a cool blond and grounded presence on the stall. 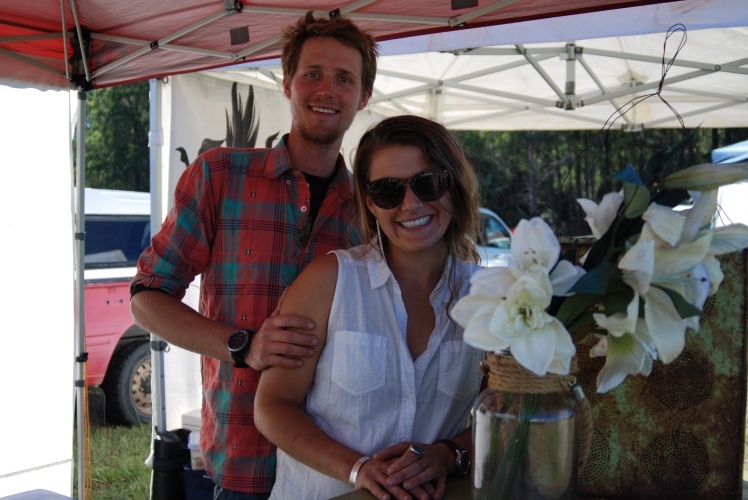 The balance between them perfectly reflects that achieved by a good buch brew, which strikes a tangy middle ground somewhere between tartness and sweetness. It’s not a high sugar drink, with about three to five grams in a bottle, says LT, but it’s undeniably refreshing, like a cup of tea taken to some higher level. Natural effervescence gives it the added bonus of great mouthfeel and lots of excitement on the palate. ‘In forced carbonation the bubbles are all the same size,’ she says, ‘but in natural fermentation they’re all different sizes and they act on your taste buds differently.’

It’s a drink with local flavour too, LT adding fruits from local producers. ‘Being at the Harvest Market has been fantastic because I can see when raspberries are in season, we’ve currently got strawberries from Stonesthrow in Launceston,  we’re working on a new blueberry flavour with Three Peaks Organics, and we’ve gotten blackberries from Sheffield Gardens, and basil from Thirlstane.’ It’s about capturing the essence of a place in a bottle, she says. What she brews in Launceston is different from what brewers make in Hobart because the natural yeast and bacteria in the air is different. ‘And the colony in the air changes through the seasons, and that’s what you’re capturing.’ 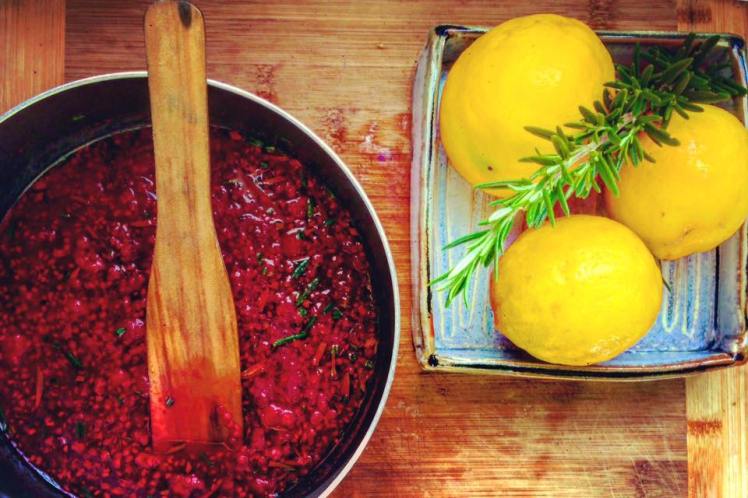 Kombucha is the first product for the long term venture that LT calls Avocado Moon, in which she aims to share her love of good, mindful, healthy food through education initiatives. ‘I call myself an aspiring farmer,’ she says. ‘My dream is to have a sustainable educational farm, where people can come and learn how to process their own chickens, learn about fermentation, where they can stay on the property, with maybe a small café.

If this sounds like a life’s work, that’s because it is. ‘This isn’t a money making scheme, the educational aspect is really important to me,’ says LT, who wants people to learn about fermentation and experiment with it at home, even if it means they stop buying her product. She’s already moving on, with ideas about other products bubbling away in her creative mind. ‘I’d love to do kimchi, fermented vegetables. In terms of health benefits, they have a lot more to offer.’

It all stems from a love of food that came from LT’s mother. ‘Whatever it took, we always ate a certain way, and that was organic and very cleanly.’ She was the kid who got teased at school over her lunchbox, she adds. Instead of having brown paper bag with a sandwich, her mini-cooler contained real silverware, a handwritten note on the napkin, a salad with a homemade dressing in a jar and tomatoes in separate containers. ‘I was totally doted on foodwise, but I grew up helping my mom in the kitchen and that was our thing that we’d do together.’

It made LT an early, independent and capable cook and it was clear after she graduated that food would be a big part of her life plan, a wisdom that she would pass on as it was passed on to her. That deep seated love and respect of good food that her mother gave her is something she will never lose. And in Avocado Moon Brew we see just the start of what she will do – sharing the mother love, one brew at a time.

One thought on “Sharing the kombucha love”